What to do now to prep for next winter

Did you have ice dams, high electric bills and a leaky basement this winter? Act now to solve all these winter problems.

Congratulations! According to AccuWeather.com, you officially made it though one of the coldest winters in 20 years. Your house, on the other hand, may not have fared as well.

With the chilly temperatures (hopefully!) behind us, you probably don’t want to be thinking of the snowy season. But it’s never too early to start your home’s winter prep list, and address any issues you had this year. Eric Messer of Sunrise Building and Remodeling Inc. in Briarcliff Manor offers a few tips to help identify the most common problems, and how you can winterize your home next year.

• What did happen: You had sticker shock when you got your gas and electric bill.

A combination of bitter weather and higher natural gas prices sent the average Westchester County’s residential utility bills soaring an average 21.8 percent for electricity and a 16.5 percent increase for gas; Rockland County’s energy consumers faced natural gas bills up 21.3 percent just between January and February of this year while their electric bills have increased 5.4 percent during the same time.

• What you can do now: Eliminate drafts. Drafts occur when cold air seeps in from windows or doors. Causing pockets of cold air, they also contribute to rising energy costs because your furnace has to work harder to keep your home warm.

“Most people think they should replace the windows,” Messer says. “Don’t. Try taking this step first — homeowners should try to reduce drafts via air sealing. There are specific companies that do this — they come to your home, identify leaks, and caulk or blow in insulation to reduce air infiltration.”

Think about going solar. “With the government paying nearly 70 percent of installation fees, and no-money-down options available, it’s a beneficial solution to consider, that also adds resale value to your home.”

• What did happen: Ice dams formed on your roof.

According to Messer, ice damming was one of the biggest problems this winter. “Ice damming occurs when there is inadequate insulation around the eaves in the roof,” he says. “The heat from the home actually escapes in these sections, causing the snow to melt.” The melted snow causes moisture to collect, eventually leading to leaks inside your home.

• What you can do now: “In the fall, you want to make sure to get your gutters and leaders cleaned out. But if the problem is reoccurring, you might want to consider installing a snow and ice barrier. This will protect the roof against leaks caused by ice dams and heavy rain.”

• What did happen: For the first time ever, your basement flooded.

• What you can do now: Have your drainage system checked, and, again, have your gutters and leaders cleaned.

• What did happen: A cycle of plunging, frigid temperatures followed by brief periods of warming caused your pipes to freeze. And then burst.

Pipes freeze when they are exposed to cold temperatures, whether you leave them dripping or not. Frozen pipes are not only a mess to clean, but they can be a big expense to replace.

• What you can do now: “We had record low temps this year, so if your pipes didn’t burst, you’re probably safe for next year,” Messer says. “But it’s always a good idea to make sure your pipes have adequate insulation.”

Cross these items off your list before the temperatures dip next year.

• Clean out your gutters.

• Replace the air filters in your furnace.

• Make sure the dampers in your fireplace are working and closed.

Messer recommends: Try a chimney or flue balloon ($19.99 and up), which will help keep the warm air in your house from escaping through the fireplace.

• Install clock setback thermostats, which allow you to regulate the heat during the day and evening based on your work schedule.

Messer recommends: If you’re tech savvy, try the Nest Thermostat ($249). This intuitive gadget learns your living pattern and regulates itself after one week.

• Check the seals on all of your doors and windows.

Messer recommends: “A simple door sweep — $3.99 at Home Depot — can prevent warm air from escaping underneath a door.”

Energy Efficient Tip: “If your children are off to college in the fall, dial down the water heater,” says Messer. “You’ll still have plenty of hot water, but you won’t be using as much in one day, so you won’t have to refill and reheat the tank as often.” 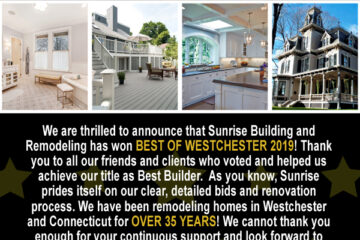 Thank you to everyone who voted for us. Sunrise Building and Remodeling is excited to announce our “new title!” 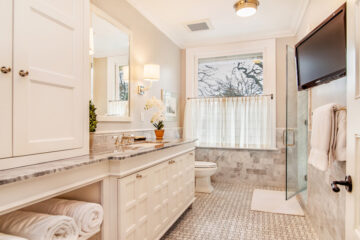 We don’t typically think too much about shower doors until you begin renovating your bath and realize there’s a big variety of designs and styles. More than ever before, you can customize every aspect of Read more… 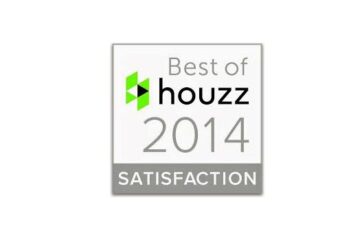